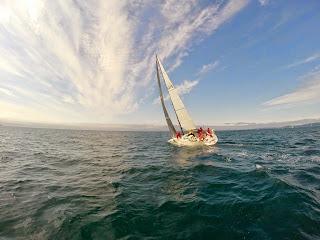 Swiftsure was nostalgic and fun.  We may have even broken some records.

Growing up, Swiftsure was an annual ritual.  For years, Dad would race, mom would go up to Victoria and I’d stay home.  I was told ‘Swiftsure is no place for a 3 year old.  Or a 5 year old.  Or however old I was during that year’s swiftsure.

Trying telling that to our crew this year.  We had 6 souls on board, including Magnus “rail meat” Cross and Porter “deck monkey” Cross.  Ages 4 months and 2 years respectively.


The crew included Jill, the mom, playing the simultaneous roles of Chief Safety officer, Ships Morale officer, Cook, Night Watch Captain and finally helmsman.  Down below she ran both an effective day care center as well as an excellent catering service for the crew above.

Skipper Andy, crewman Mike and myself rounded out the 2015 swiftsure team on Yahtzee.

The pageantry of 198 boats leaving the docks for the start was enhanced by bagpiper on a larger boat leaving the harbor.  Flags flying, music blaring the trip to the starting line was a fine way to start a memorable memorial day weekend. 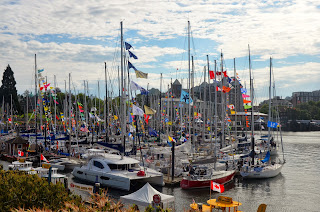 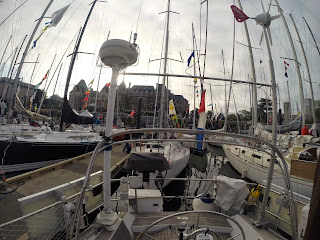 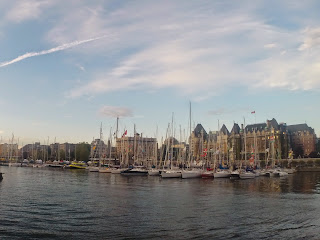 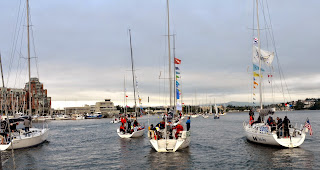 Andy nailed the start on port tack and we beat to windward in a 10 knot breeze pushed by a strong ebb. 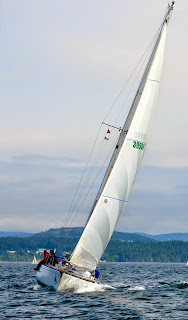 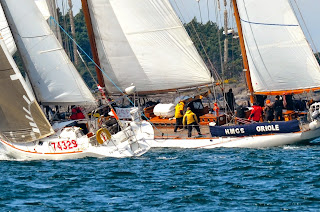 Race rocks is the first point of land to round and we made a move which seemed right at the time but turned out to adversely impact the remainder of the race. We were headed towards shore just north of race rocks and one by one boats tacked away and we followed suit.  From the looks of it the wind was less inshore.  Another similarly rated boat held on to their course another 200 yards or so then tacked.  At that point we were parallel to them and ahead.  As it turned out, the current was much better towards the shore and they had a perfect line to go through race passage.  Pushed by the strong ebb they shot out of race passage like a cannon ball.  We got through as well, but considerably behind.

Jill later remarked that it was like a marathon race where out of thousands of runners, a very small number of elite runners had a viable chance of winning. The rest make the race their own.  And so it was with us.  We made our own race.

And what a race we had. 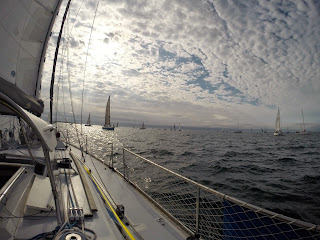 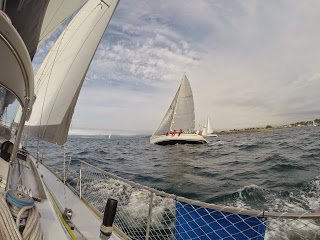 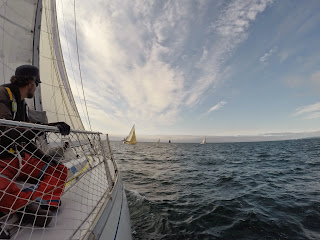 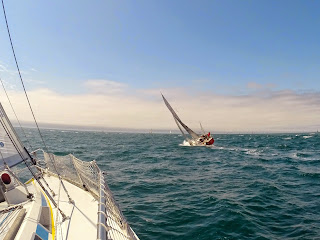 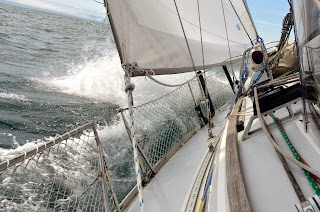 As the breeze freshened we put one reef in the main then two.  We spent a couple hours in gale force winds driving to windward with the main double reefed.  With 3 of us on deck, we were fairly busy.  Oh what fun!!

Jill was down below in the aft cabin and could hear everything we were doing up above.  She could anticipate tacks, shifting and bracing for the opposite tack holding Magnus and entertaining Porter.  She later remarked it was an incredible time with the kids.

Our spirits soared as we sailed towards the Neah Bay mark.  A rounding seemed certain in the early evening.  For many of the faster boats this came true.  Just over an hour away from the mark, the winds began to die and boat speed went from 6 knots to 5 knots.  Then 4, 3, and finally managing to stay above 2 knots was a struggle.

The anchored Canadian navy ship serving as the Neah Bay mark, once so close was now hours away.  We finally rounded around 2300 hours (11pm for landlubbers).

A rhumb line blast back wasn’t possible owing to wind so we headed North to the Canadian side of the strait looking for that elusive element.  We finally found it and had a great spinnaker ride in the  dark down the straits, dodging a couple of outbound tugs on the way.

Night sailing is magical.  The senses are heightened and the only thing visible is the bioluminescence in the water.  The wake and the bow wave are fascinating.

Steering by compass and the mast head windex at night take concentration and skill.

The breeze freshened to the point of dousing the spinnaker while rounding race rocks.  As we neared the finish line we hoisted the spinnaker again as the wind slacked and we had a fine spinnaker finish. 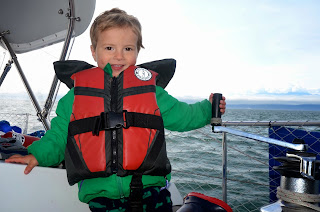 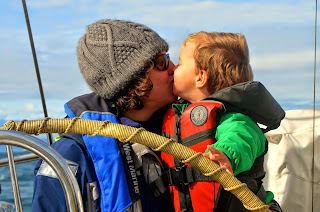 All parties agreed it was a wonderful experience.  Racing with the kids worked quite well.  As Jill said, they just stayed home (Andy and Jill live on their boat).  The motion is something they are accustomed to and it provided Jill with close contact with the kids being her sole focus for hours at a time.

My learning was I need to do more racing, serving as crew.  Any skills at racing I had were rusty after 30 years of atrophy.  As one dock mate put it, it’s not so much the knowledge, but the muscle memory.  Instinctive reacting is something I need to work on to provide more value to the team.  Some of that returned during the race, but local races will help me next time (There will be a next time, right Andy?).

It was great being with Andy, Jill and Mike for the weekend.  What an awesome race.  Thank you!  And with the kids, we may have had the youngest crew on board ever in a Swiftsure race!! 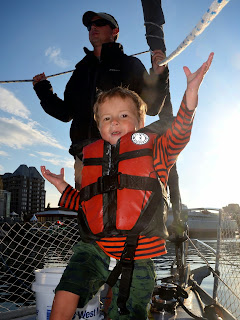 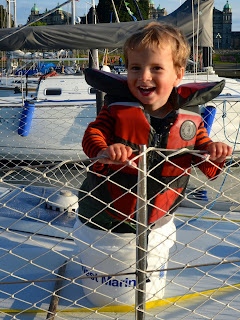 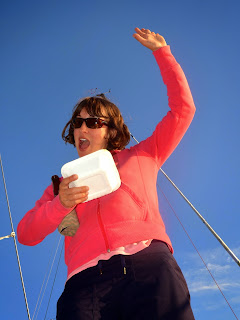 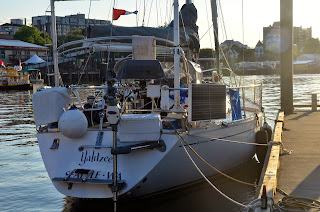 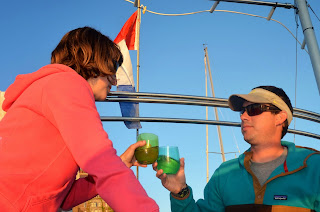 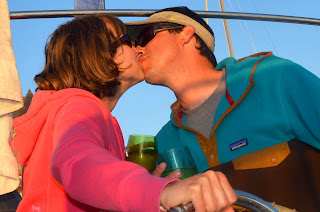 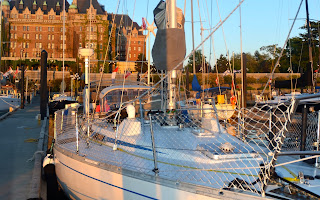 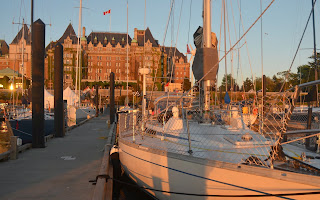 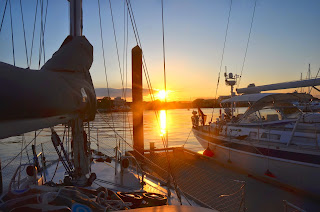 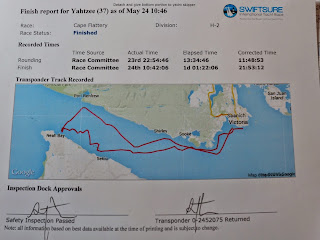 Thanks to Andy, Jill, and Mike for a magical weekend.