Astoria would be a great place to spend a fall weekend.  That was my first thought upon arriving there the eve of the 40th running of the annual ‘Oregon Offshore’ Sailboat race. We were looking looking forward to the pre race party followed by a leisurely Thursday morning and a 1230 hours start. Until we learned that the start had been moved to 7am.  And learned it was a 2 hour trip from the dock, across the Columbia River bar to the starting line.


0337 hours.  The dock was alive as I walked the recycle up to the head of the dock.  My eyes weren’t fully focused when i returned to the boat, engine running, and we were off by about 0400 hours.

The starting line was over the bar and a confused sea lay between one end, marked by buoy #2, and the other end, marked by a bobbing unanchored committee boat.


We had a decent start, but were caught in the grip of the Columbia River as she emptied into the Pacific.  I was struck by just how confused the sea can be with very little wind.  We were aware of what was happening but powerless with the little wind we had to do anything about it.  With no wind we were swept west.  The smart play was to be on port tack and fight like the dickens to the north edge of the channel and stay near the shore to escape the clutches of Columbia’s current before she fully fanned out over a wide area.  We were more fortunate than some who started and then were flushed south — in the opposite direction of the intended target of the race, Victoria British Columbia.

There was a fresh / salt interface that had small wavelets on top of larger waves which were in turn on top of large ocean swells.  The sight and sound were quite unique — and perhaps it was something that Moses saw when the Red Sea was parted.  Ok, maybe not that dramatic, but pretty cool nonetheless.

This interface was constantly moving and when the wind briefly rose we’d punch through it and escape, only to be over-run when the wind failed.  And as the current was fanning out north, we’d be over-run by this river within the ocean and owing to our slow speed (sometimes only a knot or less) the current would steal all water flow over the rudder and we’d lose steerage way.

A slow and frustrating start of the race.  3 of the crew got a little green.  Poor Porter took the brunt of it clutching his bucket and emptied his little stomach a few times.  Despite that, his spirit never flagged.  He’d give the thumbs up sign in mid puke earning our admiration and respect for his plucky way of dealing with sea sickness.  He later had it coming out the other end as well and Jill turned a bit green being down below cleaning up after him.

Soon, however the wind began to fill in and we were finally out of Columbia’s jaws, freely able to make both good and bad directional decisions.

We stayed fairly close to shore, but not as close as the eventual winners.  They later described the strategy as ‘rock hopping’ up the coast. 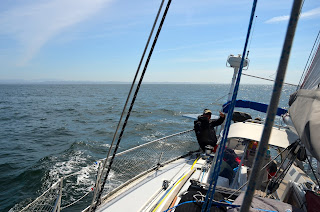 We did get out far enough to see quite a few breaching humpback whales.  They weren't close enough for pictures, but pretty impressive nonetheless.  Huge bodies hurtling most of the way out of the water then crashing down on their sides with huge splashes.  For a time there were a couple on both sides of the boat, albeit in the distance.  We also saw a few porpoises.

Andy saw it first and said “hey, there’s a baby…!  Is that a baby..?  I chimed in, well yes it is!!  Jill, down below, heard this exchange and bolted up the companionway.  WHERE?!?  We looked at her then made the connection.  We had not added the word ‘sealion’ to our description of what we had seen.  About the size of a seal, but the unmistakable shape of a sealion, it was a baby sealion.  Not a ‘baby’.  Jill was relieved.

The day wore on, Jill made some great burritos and we ironed out the watch schedule.  There were 7 souls aboard but most of the work on deck fell to 4 people.  Skipper Andy, his father Russ, Andy’s friend Cliff and myself.  Jill’s primary domain was the far harder part of the bargain, taking care of the kids and cooking for us.  Let the record state that Jill is a very capable sailor in her own right, but as good as a sailor as she is, she's a better mom and on this voyage, the deck work was covered. 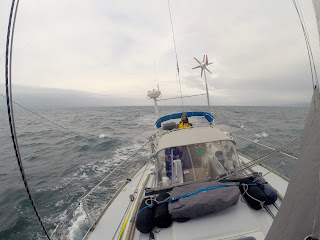 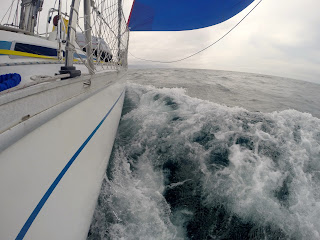 Cliff and I had both had naps in the afternoon so we took the first watch from 8 to 10.  Andy and his dad would take the 10 to midnight shift, Cliff and I would take the midnight to 2am shift, etc.  The watch system worked pretty well for a 3 day, 2 night race.

There’s something special living through a sunset at sea and experience the stars as they slowly appear.  Bioluminescence in the wake sparkles near the stern.  Really wonderful. 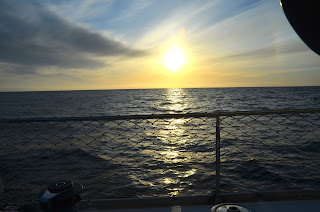 I had the starboard berth, conveniently rigged with lee clothes so myself and other stuff would stay on the bunk on either tack.

The second day was spent tacking up the coast, with Cape Flattery drawing nearer and nearer.  Friday night fell and we were still shy of the rounding into the strait. 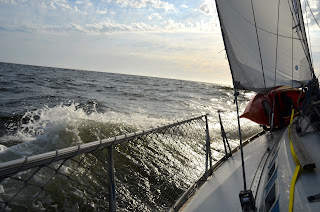 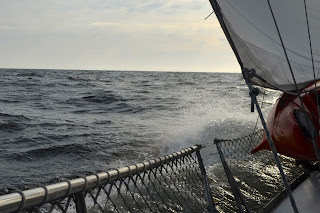 Russ and Andy had the 1230 to 0230 shift and fought light airs as they tried to get closer ‘Duntze Rock’, the real rounding just off of Cape Flattery.  Andy went down below when Cliff and I got on deck but Russ stayed up, amped up by the anticipation of the rounding.   We Gybed the spinnaker over in an attempt to get very close to the red maker warning mariners of the reefs below.

We gybed too soon, then gybed back in very light airs.  At Cliff’s suggestion we dropped the main altogether.  The main wasn’t helping the cause.  As we lined up for our rounding our speed was between 1 and 2 knots.  Very slow.  I took the boat hook and made an impromptu whisker pole out of it capturing what little wind there was into the Spinnaker.  It seemed to help a little and our speed climbed a little.

Without the skipper on deck, running the boat fell to a three person committee and it was a fun bit of communication between Cliff, Russ and myself.  No one was in charge, but the three of us would chat and land on a course of action.  It worked, and it worked well.

All of those light air shenanigans seemed to pay off as we did finally get by the mark and begin our run down the straits.

Other boats behind us were stuck at the mark for considerably longer and we counted ourselves lucky to be in the straits.

Throughout the day the wind started to build and towards the afternoon we found ourselves barreling towards race rocks.  As we approached the predicted winds started to build and build.  We were under an increasingly strained spinnaker and the decision was made to douse it.  The sheet was under incredible pressure and it was up to Russ to release the guy.  He did so but the sheet slipped and with a WHAM the spinnaker flew to leeward and the boat heeled over sharply.  Andy had yelled ‘WATCH YOUR FINGERS!!’ just as this happened and immediately there was a splat of red in the cockpit.  Andy feared the worst as he looked at his father expecting to see a bloody stump on his hand.  Russ was fine, it was the salsa that had tumbled out of place and spatted on the cockpit.  After all digits were accounted for we had a jittery laugh.  It could have been far worse. 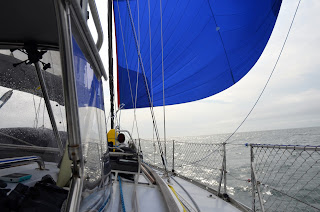 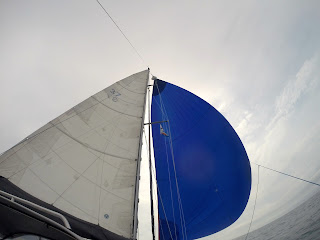 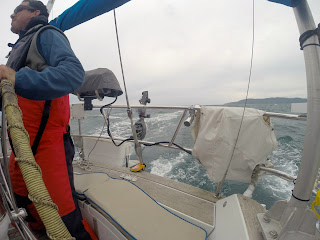 The foredeck crew wrestled the spinnaker into place, we unfurled the genoa and kept up our pace through Race rocks and Race Passage.  There was an adverse current and the waves were pretty impressive.  The wind was blowing at about 32 knots, so it was fun and exciting.

Race Rocks is always interesting but we barreled between the reefs just fine.

Finally on the homeward stretch we hauled up the Spinnaker for the final sprint.  The heading wouldn’t allow us to carry it all the way in so we doused it with 2 miles to go and again unfurled the genoa.

The finish line was in sight, we were all on deck anticipating the end of the race.  Everyone was in a good mood but suddenly Andy yelled ‘STARBOARD, STARBOARD, TURN TO STARBOARD’.  Russ swung the wheel and there was a sickening thud.  Then a few more thuds as the telephone pole, floating low in the water, smacked against the hull.  Andy dove below to check if any water was coming in but it seemed like YAHTZEE had been spared any damage.

Later we remarked that we had sailed about 280 nautical miles, much of it at night, only to hit something 300 yards from the finish line.

The finish itself was a bit anticlimactic and soon we were cleared through customs and tied to the pier in front of the empress. 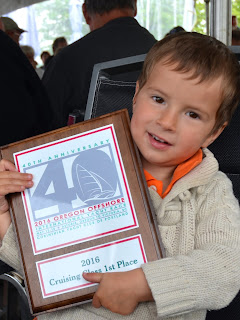 Altogether a great race with great people.  Andy is a really good skipper and I’m continually amazed at Jill’s reservoir of positive strength.

Racing on Yahtzee is more than just a race.  Yes, we're racing, but we're racing a house with a family.  Russ's father in law, Andy's grandfather, was in hospice in his last hours or days of life.  Magnus needed his diapers changed and both kids needed entertainment.  We all had different reasons to be on the boat, but life with the Crosses is an infectious adventure.  It's fun.  It spices up life.  This crew member loved every second of it.