The drive out to Neah bay was interesting.  We had a Bernie loyalist, a Hillary supporter and a disenfranchised conservative stuck in a car together for 4 and half hours.  The conversation was interesting and despite the political differences, we agreed far more than we disagreed.  All parties had a good time with the discussion.
In any case, the game plan was for Leigh to drive Adam and I out to Neah bay to crew on Jon and Michele’s Beneteau, Ardea, and get the boat down to San Francisco.  800 nautical miles down the coast.
Upon arriving in Neah Bay we decided to leave that night instead of the planned early morning departure.  A weather system was moving in and by leaving a little early we’d miss its effects.  So we left a 9:30 pm (2130 hours to you sticklers).  I was comfortably in my bunk as I has the 3 to 9 shift.
Watch systems are critical and the prescribed schedule  was a staggered 6 hour watch with each of the four on board taking two 6 hour watches each day.  The first 3 hours of any watch would be spent driving, the second 3 hours would be support.   The goal was to have two people in the cockpit at all times.   One would start at 3 (mine) and last till  9, the next would start at 6 and end at noon, then 9 to 3 and finally 12 to 6.
We later agreed that the system could have been tweaked a little.  It didn’t allow for enough sleep.  We adapted a little into the voyage and ended up getting sufficient sleep until the final 2 days where the wind and weather conditions were nearly ‘unsleepable’.
Watch systems are an interesting topic.  At the root, it’s a balance between sleep, managing a proper lookout, having sufficient resources to manage the boat and to ensure safety in the cockpit. Sleep vs safety, but adequate sleep enhances safety.    In my own view, a system has to be flexible.  Beating to windward in forecasted rising winds with several tacks  in a congested waterway between midnight and six am may require one set of resources whereas a nice down wind in run open waters in stable wind conditions with no predicted gybes or tacks would require fewer resources.

At the end of the day, we kept to spirit, but not the letter of the prescribed system and it did work.  If we had to replay everything over, we may have given more emphasis on sleep and to that other all important role on a boat.  The exalted position of ‘snacktician’ is a non-trivial task and to divide the watch system into four equal parts then load up one of those roles with the additional tasks of cooking and cleaning not only isn’t fair, it robs that person of needed sleep.
We spent a little time reviewing the watch system at the end of the trip without landing hard on what the ‘right’ equation looked like.
Back to the trip, we motored for the better part of two days looking for the elusive wind.   Michele termed the VHF radio the ‘box of lies’ when it came to weather forecasts as the weather models kept evolving.
While motoring was getting a little old, fishing for tuna was perfect.  They had rigged line with a little surgical tubing to take up some of the slack.  When the tubing stretched, fish on.   Jon pulled in both fish, I gaffed the first, Adam gaffed the second. 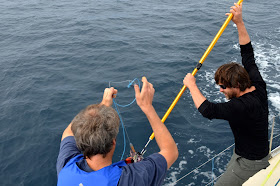 Between Jon and Michele, wonderful things happen to Tuna after they come aboard.  I'm quite sure the Tuna themselves would have an alternate viewpoint, but between the Ceviche, Sashimi, smoked tuna and a fantastic Thai soup, the tuna were transformed into tasty meals. 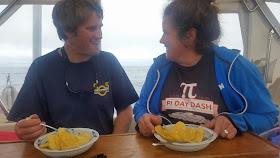 Finally just after midnight on the second day the jib was unfurled and the sailing began.
We were visited by a small pod of ‘Northern Right Whale Dolphins’.  Adam and Jon saw one doing a ‘tail walk’ along the lines of Flipper.  I had never heard of them and they are distinctive for their lack of a dorsal fin.

We were also visited several times by Pacific Whitesided Dolphins.  At night they left streaks of bioluminescence.
We did sail in the fog. 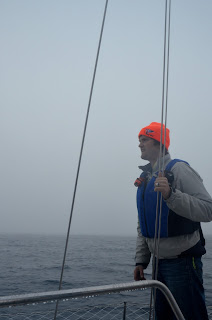 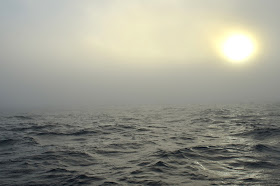 For nearly two days we had some degree of fog. 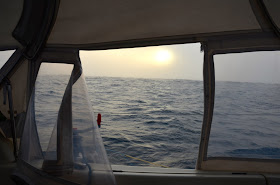 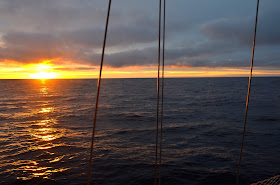 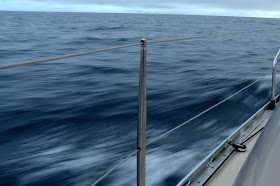 The wind freshened the last two days.  Early Sunday morning, just prior to 3am, we were barreling along wing on wing at 7 or 8 knots.  I was still asleep forward with the alarm set to go off in about 2 minutes.   I went from blissful sleep to bolt upright as there was a huge THUMP and the boat nearly stopped dead in the water.  We had hit something large.
Several thoughts flash through the mind at that point, but being close to, if not right on top of the point of impact, I dropped to the floor and started pulling up floorboards.  Earlier in the spring, at the end of the Oregon Offshore Race, we had hit a telephone poll broadside on Andy and Jill's boat and the sound was about the same.  A sickening and solid 'THUD' to be sure, but not a crash or a cracking sound.  I did a quick check and Jon came forward for a more thorough check while Adam went forward on deck to assess.  Michele was up as well checking other areas of the bilge.  All was OK.
No one saw what we hit, but my guess was a decent sized log.  With enough mass to nearly stop the boat, but soft enough not to leave a dent, scratch or other visible sign on the boat.  All and all a good wake up call on a couple of levels.

Things were getting back to normal after the THUMP when we rounded up slightly and the boom preventer parted with a load snap that reverberated throughout the boat.  We had to make a couple of course changes to again secure the preventor.
Right after the hit then the snap, the crew was getting our collective wits together and an odd scenario set up.  Another Beneteau had been visible on AIS and had marched on in front of us, stern light visible in the far distance.  Unknown to us, they had dropped off AIS and another target, a powerboat, appeared in their place going the opposite direction headed towards us.  There was minor confusion sorting that out.  Michele was on the AIS below and the other 3 were in the cockpit.  We saw the running lights and gyped to port tack, crossing in front of the powerboat.  Only their red light was visible, so in effect we had put ourself in position of finding their green light to come in front of them.  After a few seconds we gyped again and put ourselves safely out of harms way.
It was one of those events where tired humans were wrestling with several things at once.  Just minutes after the 'THUMP' we had a crossing situation with 20 or so knots of wind.  There was minor communication issues as input was provided to 'head west' but that takes some processing.  The confusion was only momentary and all was resolved in a few seconds, but it was a good cautionary tale.  Clear communication ("steer Starboard 90 degrees" may have helped.  In any case, although both we and they were transmitting on AIS, there were no hails on the VHF and there were no horns sounded.  While we were uncomfortably close, there was sufficient distance and plenty of time for more evasive action that mercifully wasn't needed.
The wing on wing run was good for quickly closing the gap to San Francisco, but the boat rolled from side to side as we barreled along.  So much so that sleep was difficult for all.
The last day was in 25 knot wind and the waves were impressive.  Ardea handled well and that Monitor wind vane, now named 'Toonces"after an old Saturday Night Live Skit.  The monitor wind vane did considerably better than its namesake and kept a great course relative to the wind.
Coming into San Fransciso was a little anti climatic.  I think all were ready for some rest. 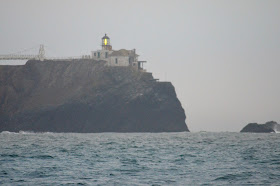 The Point Bonito light house stands guard just outside San Francisco Bay.  It was the first lighthouse on the west coast with a fog horn and was the last manned lighthouse on the California Coast.  Originally built too high to be effective in low level fog, it was moved in 1877 to its present location. 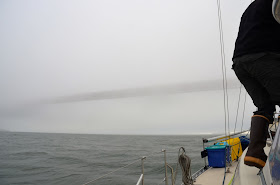 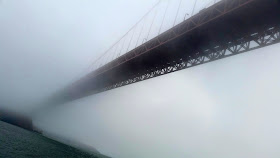 All in all a good passage with good company.  Ardea is a solid boat that sails well.  Adam and I were fortunate in sharing an early leg in Jon and Michele's long term voyage plans.  Fair seas and following winds! (which we think is better than the original fair winds and following seas quote).